Conserving Salmon – How to save but catch more!

Many moons have passed since I began working as a Ghillie on the #RiverSpey, in fact 35 years to be precise. Looking back, one of the things I remember was, most guests were much weaker fly casters than today’s guests. In fact, most couldn’t handle a sinking line and heavy fly at all. But to be fair, this was down to the fact that all they had was a fast sinking double taper line. 4 - 6 hours of lashing this around each day was more than enough for anyone. Most would resort t
473 views3 comments

The Icelandic landscape, deviod if influence of man. Fluctuations and not Cycles Massive Decline in salmon Runs across Scotland in 2018 -19! When did it [the decline] begin? OK, I've heard so much about salmon runs being cyclic, and that its all happened before, and those promoting this suggesting we "ride the storm" and wait for it all to come better again. Some things to understand. Yes, for sure there are fluctuations in runs of salmon, this has happened since at least t
224 views0 comments

After years of trying to tell those running our rivers what going wrong, finally, they're beginning to listen to the people who know. Th
110 views0 comments

The Business of Salmon Fishing

The end, or a new beginning for the “Business” of salmon fishing in Scotland!? Back in the 1990s, I began to see the decline in salmon numbers having an impact on the people who fished for them here in Scotland. Factors such as the growth of Salmon fishing in unspoiled places like Russia, greater disposable income, less holiday time, and cheaper travel began to have an impact, so gradually, potential income began haemorrhaging from the economy of Scotland. Turn the clock forw
43 views0 comments 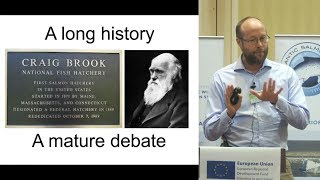 Kyle Young – Stocking works, but is detrimental. The green numbers relate to the time frame on the you tube clip where Kyle refers to the particular point. No doubt that, if carried out in the right way, stocking works! 10.45 No doubt that if carried out in the wrong way, it doesn’t work! 15.59, 16.40 Both in the wild and in hatchery - 10% of spawners = 90% of the adults. Just as 10% of the anglers catch 90% of the fish! Suggesting only one in every ten wild fish picks the co
119 views0 comments

I saw this film and thought it had some very good points. Orri Vigfússon - Government and scientists refuse to believe, by killing too many fish over a period of time, obviously, “we” (man) are a major part of the problem. The period between the 1950s - 1990s saw a massive change in how we managed predators of salmon (including man) here in the UK. Not so much Iceland. Arni Baldursson - Mentions a river In the south west of Iceland, which, due to the presence of a large i
11 views0 comments